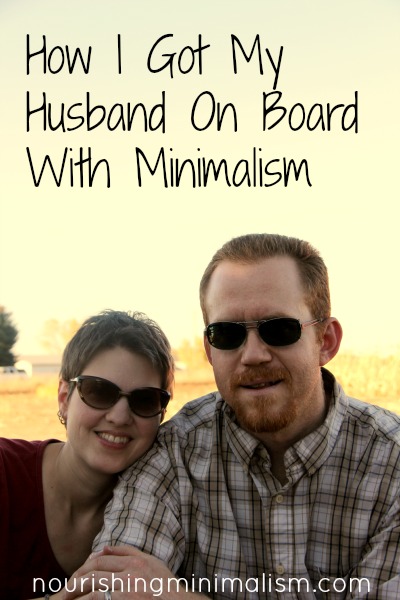 Just for a change of pace, I asked my husband to answer a few questions about our journey to minimalism. I was the one who started the decluttering, and though he was supportive, it was about 5 years before he started decluttering on his own and taking a minimalist view on life. Change doesn’t happen overnight, and that’s ok.
The fact is, I didn’t set out to convince my husband, or manipulate his way of thinking. And that is probably why it worked. If we purposely try to lead people into a different way of thinking, it generally backfires. Be the example. Allow the changes that you are making to inspire. Be patient and understand that it’s a personal decision, they have to come to it on their own.
The following is from my husband, Brian:

When your wife first started decluttering and you created the yearly decluttering chart for her, what did you anticipate the outcome being? I figured it would just be a bunch of misc papers and junk items… not necessarily my junk items. It reminds me of a line from George Carlin: “everyone else’s stuff is junk, but my junk is stuff.” In hindsight, if everyone else saw my stuff as junk, should it really have that much value with me?
How long was it before you really got “on board” with living minimally? It wasn’t any one particular event, it’s kind of like the process of decluttering, it took quite a while and over time I was willing to get rid of more and more stuff.
What benefits do you see to minimalism? More space. More freedom. With having less stuff, it meant there was less burden, it gave me more motivation to be present with what is going on in life currently, rather than always living in the past. I appreciate my wife taking the lead in this, I think I would have just continued to hang onto things and I hadn’t realized before, just how much time and energy went into taking care of stuff.
What made you decide to “let go” of your college textbooks, high school t-shirts, baseball cards, comic books, etc.? I was disappointed to find out that my collections of baseball cards and comic books had no monetary value, I had saved them as an investment, but so had everyone else my age. There was no demand for them over the last twenty years and I didn’t want to hold onto them for the next fifty years “just in case” they gained in value. When I finally decided to let go of the comic books, they were just sitting in the basement collecting dust. I thought they were cool, but I never read them anymore, no one did. The problem was that they had been important to me growing up and I didn’t just want to throw them away. In the end, it was easier for me to give them away or in some cases even trash these items rather than to try to sell them for $.10 here, $.25 there.
Did you ever get frustrated with the amount of stuff leaving your home? Not necessarily the amount, but some of the items. Some things are hard to let go of, even if you know you need to. Just in general, things that have fond memories from my past were hard to let go of. I had trophies from high school and college that I took a lot of pride in at the time, but that was 20 years ago, at this point in my life, I don’t want to brag about something I did in highschool, I want to celebrate things going on in my life currently. I figured if there was nothing in my life to celebrate currently, I needed to change that.
What are your thoughts on keeping things for “just in case” reasons? Very rarely do those “just in case” things come up. It’s easier, and much less time consuming to just purchase what you need when you get into one of those situations. I had my grandfather’s tools from his shop, and I got those when he passed away. They carried a lot of good memories for me, because I remember being with my grandfather while he was tinkering in his shop. But they were just sitting in my garage, I had to come to grips with the fact that I don’t ticker in the garage like he did, so I let them go to someone who could put them to good use. We have a couple friends who do a lot of woodworking and they came through and picked out the things that they would use. For them, it was great, because old tools were built well and for me, it’s nice to know that they are in the hands of someone who appreciates them the way my grandfather did.
Do you have advice for those who want their spouse to declutter? First, declutter your own things. Lead by example. Talk about your reasons. Once you’ve completely gone through all the items that you don’t need his input on, start with things that he cares about least of all. If there are boxes of books in the basement, ask if you can get rid of those first, rather than just going for his current collections.
Try bartering- if he has 5 broken down lawnmowers sitting in the garage, ask him to compromise by selling/trashing those and just getting one new lawnmower.
Utilize the “5 Why’s” and work through items that are difficult. Talk about the difference between the person you are (hobbies, work, how you spend free time, etc.) and the person you want to be: the fantasy self. No amount of lawn care equipment is going to make you have a fantastic yard if you really don’t like doing yard work. It’s ok to let go of those aspirations, get rid of all the gadgets and just pay the neighbor kid to mow the lawn.

What are your questions for Brian? Ask him in the comments below.

← From Clutter and Depression to Minimalism and ContentmentDo Minimalists Keep Hand-me-downs? →