I swear junk sneaks into the house and hides in the kid’s rooms! Papers seem to procreate like rabbits and poke out from under the bed and in the dresser drawers. I think dollar store type toys do the same thing!
I remember reading a story of a boy who had a bad attitude and the mother, at her wit’s end decided to box up the son’s room. She left out a coloring book and a matchbox car. 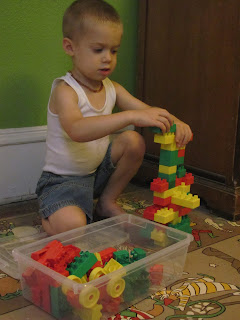 She told him that he would need to earn his stuff back. But she found it interesting that when her son did something to get his reward, instead of getting a toy out of the box, he asked to do activities with his mom: play checkers, do a puzzle, toss a ball…
As soon as the kids are old enough to count to 20, we enlist the 20 toy rule.
This is their personal amount of belongings- it doesn’t count clothes, blankets, family games or the lego/duplo/wooden blocks sets.
Kids need to be involved in this project, it works best if they make the decision on what to keep.
With their help, clear the entire room, piling all the toys, misc junk, papers, etc. into the middle of the room. Give each kid a box and tell them to pick out 20 things to keep in their box. We had a cart like this for years when my teenagers were little: the one we had had 3 different colored drawers, which worked perfectly!

I suggest you leave the room now and only go back when the kids are done, or if you absolutely have to help settle a disagreement.
You’ll find that kids keep the most bizarre things: It normally comes down to a spiderman action figure (and no, it never got played with, before or after “picking” it… not sure why they thought it was so great…) or the craft he made in Sunday School (that will end up in the trash before the week is over). But who cares? It’s his 20 things.
I include stuffed animals in the 20. Sometimes that has been a tough call for them. But they make the final decision and it’s only the special ones that have survived through the years.
After picking their 20, set their special boxes aside and sort the rest of the pile. Toss all the garbage and broken toys, get those found socks into the laundry and put the give-away into a large box or garbage bag.
Carry the trash out to your dumpster and the giveaway to the car immediately. Don’t let it sit in the garage! Drop it off at a charity store the next time you are out running errands.
Repeat every 6 months.
It gets to the point where the kids start asking to do this project. They enjoy a clean room and a limited amount of toys.
It also helps their creativity- there is now room to have legos out and build together.
A clean organized space makes kids feel at peace. Sure it’s hard being a parent that sets limits- but even if they do it kicking and screaming, in the end, they are pleased with the results.
Ready to tackle the kid’s rooms?