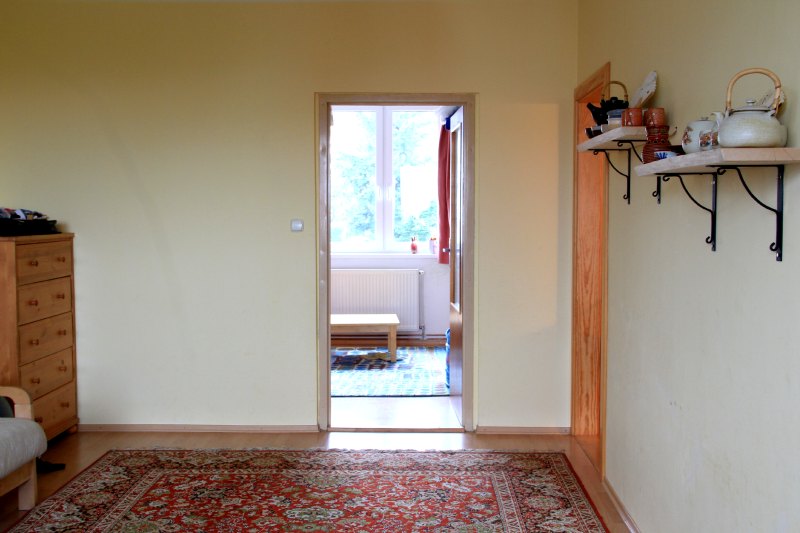 Whenever I return to visit Canada, where I grew up, the size of houses always takes me by surprise. In Europe, where I now live, space is a highly valued commodity and the general population lives in much smaller quarters.

When friends of mine in the States bought a condo, they were advised over and over that 700 square feet was much too small for two people. They were told that they would end up keeping stuff in storage, which I found puzzling. What on earth could two people have that wouldn’t fit in a home that size?

Even in Slovakia though, eyebrows are raised when people realize that our family of 6 lives in a 70m square (753 square feet) apartment. While living in an apartment is not my ideal, the size of it doesn’t really bother me. (We do have a room in the basement where we can keep bicycles, stroller, etc.)

I love to look at innovative designs of multifunctional furniture and creative storage in tiny houses, but to be honest we don’t really have any of that. Nor am I a super organized housekeeper – while I can declutter and create systems, I still have a lot of room for improvement in following through with those organizing systems.

However, I’ve found some ways to create space for lots of people in a small area.

How many toys kids need has been a hot topic lately. I kind of change my mind depending my mood – if there are toys lying on the ground, I’m inclined to think there are too many, but when I actually go through them I realize there’s not much to get rid of. I try to keep the toys from being excessive but I wouldn’t say they are at an absolute minimum either. We store most of the toys on a bookshelf, as storing vertical is much more space efficient, the loose toys in boxes or baskets. I prefer to keep and buy play things that appeal to a wide range of ages. I also don’t keep noisy battery toys – 6 people in a small space is noisy enough without extra beeping and whirring.

The amount of things that you MUST buy for your baby is mind boggling. I’ve seen cloth diaper stashes for singletons that were twice as much as what I had for twins. Part of my minimalism with these kinds of products is also my frugality – I could easily have become a baby carrier hoarder if they were cheaper.

What did I find necessary? Some clothes (preferable neutral if you are planning on more than one), a few swaddling blankets, a couple baby carriers (we managed twins with two homemade linen ring slings, a soft structured carrier, and a long wrap, one more soft structured carrier/mei tai/wrap would have been nice), stroller (after the first), a few wooden and cloth toys, and a double nursing pillow is a must with twins. We also had those seats that clip onto the table instead of highchairs or sometimes we sit on the floor to eat. We did have a crib, but to be honest it mostly ended up being a dumpling place for clothes.

I didn’t have a changing table (safer on the floor anyway), baby bathtub (bathed baby in the tub with me or in the sink), baby bumbo’s or reclining chairs (although I can see using them, I think I generally wore them if they wanted to see what I was doing), special baby shampoo (I rarely used soap on a baby until they started getting into dirty places), baby walkers, or swings.

Inspired by Katy Bowman’s sitting furniture free house tour, I gave away our one armchair and am so glad I did. It opened up the floor much more than just the actual space it filled. We still have a couch but we sit on the floor quite a bit, and it’s better for you anyway. We also have a small exercise ball that gets played on a fair amount. We still have a normal dining room table and chairs, but if you really need to save some space, cut down the table and sit on the floor – it’s amazing how much room it will free up. In the kids’ room we cut down a small table to 14″; the children kneel or sit to draw, do homework, or craft, eliminating the need for space-hogging chairs.

I also keep some pieces of furniture in unconventional places. There’s a dresser in our living room, for example. And a huge shelved wardrobe in the children’s room holds everything from a tool kit to Christmas decorations to important papers. Just because it doesn’t traditionally belong in a specific room doesn’t mean you can’t keep it there!

While the top photo is my living room, it’s not really representational of how it usually looks. There are always children, with or without toys, the exercise ball, and in the winter months a clothes drying rack (no dryer).

This one isn’t simple to effect, but if someone is renovating or building anyway, here’s an idea. In many houses in Europe the toilet is kept separately from the rest of the bathroom, often with a tiny sink. Toilet ‘rooms’ are called WCs, water closets, because the toilet is really in a closet sized space. The other room has a normal sized sink, shorter than normal bathtub/shower, and washing machine. Having two separate spaces for toilet and shower greatly reduces the stress of the morning bathroom rush and, I’ve heard, is more hygienic as well.

We haven’t gotten this one done yet, but switching normal doors for sliding doors takes up less room and make the space behind the door more usable. There are some gorgeous examples on Pinterest.

Making Do in the Kitchen

There’s a long list of kitchen gadgets that promise to make cooking easier and faster – and many of them do. But they also usually take up a lot of room. Anytime I start dreaming of buying x,y, or z, I have to ask myself how much it is going to improve my life and if there’s a place to keep it. Also, I try to choose versatile cooking ware – that cute cast iron crepe pan is probably not going to make the cut. Sometimes, you just have to make do and use the cook ware you have in creative ways (like using a metal casserole dish to make stir fries, for example).

I am inspired by William Morris’ adage to “keep nothing in your houses that you do not know to be useful or believe to be beautiful.” And beauty, he maintained, “is a positive necessity of life.” In his interior design company, that produced everything from furniture to stained glass windows to wallpaper and murals, he emphasized good quality and natural sources; I would often rather do without something than quickly get it cheaply and poorly made and save up for the better made but more expensive version.

While decluttering ‘stuff’ is a good exercise, it is important to keep in mind the goal: to create a home, not simply devoid of stuff, but a place of beauty and rest, a home that uplifts the spirits as well as providing for the physical needs of the person. 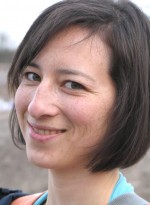 A Canadian transplanted to Slovakia, Naomi aims to cook real food and create an environmentally friendly and beautiful home for her family. The closest she’s come to her dream farm is growing tasty live bacteria on the counters. The simple life is an illusive ideal, that she nevertheless strives toward. Naomi shares her food creations and photos of Slovakia at Almost Bananas. She looks forward to connecting with you on Pinterest, Facebook, and Instagram.

Success! Now check your email to download your Free PDF

Hi there! I’m the Joyful Space Specialist. it’s my desire to help others create a joyful space of their own and enjoy their time spent at home.