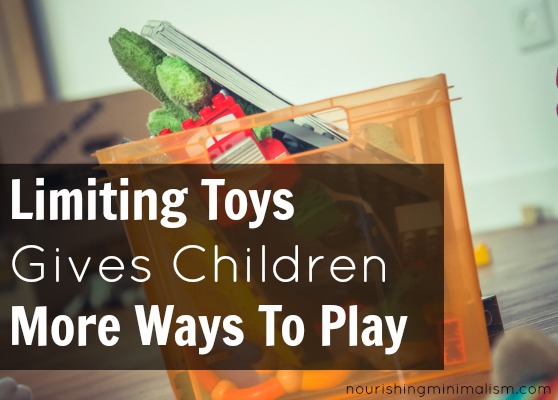 We live in a society (at least in the U.S.) that believes children are only loved when they have multitudes of toys. They need to have plenty of variety: fun, educational, building, role playing, video, characters, etc. and all categories in between.
When we as parents come to the point where we see no benefit to this excessive amounts of toys and decide to limit them drastically, people think we are purposely causing harm to our children, or we must be poorer than poor and they try to compensate for us by giving our children more.
But what I’ve found, and what many others have found, when choosing a more Simplicity Parenting approach, is that children thrive in an environment that has less.

Fewer toys reduces conflict among siblings. With feedback through our blog and countless workshops, we’ve noticed kids get along better when there is less. It’s not a huge mystery. Fewer toys invokes scarcity. Scarcity fosters more cooperation. It activates the limbic system in the brain which encourages cooperation. With fewer toys, a toy is rare and is precious. Limiting toys allows for increased depth of play that allows children to process their day. What Too Many Toys Can Do ~The Mother Company

“Our studies show that giving children too many toys or toys of the wrong types can actually be doing them harm. They get overwhelmed and cannot concentrate on any one thing long enough to learn from it,” said Lerner.
Experts hesitate to put a figure on the number of toys children should have, but many believe two dozen is enough for children of preschool age. Most exclude books from this rule because of research linking reading with improved academic performance and self-esteem. “The more books, the better,” said one.
By contrast, computers and electronic games are causing increasing concern over their impact. Sylva said: “There is some disquiet that playing on computers and electronic games can restrict children’s development because they take away the need for creativity and imagination – and these are the essence of childhood.” Children Play Less the More
Toys They Get

Kids learn to be more creative. Too many toys prevent kids from fully developing their gift of imagination. Two German public health workers (Strick and Schubert) conducted an experiment in which they convinced a kindergarten classroom to remove all of their toys for three months. Although boredom set in during the initial stages of the experiment, the children soon began to use their basic surroundings to invent games and use imagination in their playing. Why Fewer Toys Will Benefit Your Kids ~Becoming Minimalist

According to Psychologist James Oliver, toys that pre-determine play – and this is especially true of merchandising – offer limited possibilities for fun. So while Buzz Lightyear can only ever be a space ranger, a doll might become a hungry baby, a tea party guest – or a space ranger – depending on the child’s desires.
These prescriptive toys could even be damaging, says James. “Young children discover their identity through fantasy play. If their toys offer a limited repertoire, this process is eroded.” Are children given too many toys? ~BBC News

…when children have too much stuff and they constantly get more, we’re creating an environment where children are dependent on the things that corporations sell for amusement and soothing, instead of depending on their inner resources. The patterns of consumption learned in childhood can last a lifetime. ~NY Times

Keeping the toy collection limited can be difficult, especially when others around us feel they need to “bless” the “deprived” children. What do we do??

We have found that the only real solution to the continual flow is a commitment to the idea that we will not let ourselves or our kids get buried.  We have to be diligent about clearing the clutter on a regular basis and only keeping out a few things at any given time.  It is an ongoing process, not a one-time event. Why I Took My Kids Toys Away – One Year Later ~Living Well, Spending Less

Start out the conversation with the statement:  “I have some fear in telling you this…” then begin with what is on your heart.  Emotionally “show up”, feel your feelings, and tell the truth. Take the time to explain your position on gifts and talk about a different way they can bless you, your children and your family.  Be open minded and not afraid to share those ideas.  Your heart needs to communicate that above all, the gift giver matters to you and their blessing through whatever gift is appreciated.  Give them a chance to reflect, feel what they are feeling due to your sharing and stay present with them, willing to walk through their feelings.  It’s about relationship, not the stuff.

If those family members continue to over-gift, please don’t allow it to ruin your relationship with them. It’s definitely challenging, especially with the person whose love language is gifts and whose value is firmly rooted in appearance, (as in, they don’t feel like they can show love unless they give a lot and give BIG). The best advice I have, is to accept the gifts as graciously as possible and then later, give them all away.  Reclaim Your Life: How To Redirect Excess Gifting

If you’ve decided to control the escalating arms race of gift giving, you’ll have to think beyond your own household and get the message out to your entire extended family. You could be judicious in your own spending and still find your kids drowning in wrapping paper. And Nair says grandparents don’t get carte blanche either. She recommends going shopping with grandparents — at any time of year — and offering to stow gifts away until the holidays. It will save on shipping if they don’t live close by, and you’ll have a bit more influence on what and how much gets chosen. But above all, she says, “Be specific and clear about your limits.” ~Today’s Parent

Although you can’t tell your mother what to buy for her granddaughter, you can suggest to her what your daughter needs and wants. Two months before the next gift-giving holiday, let it slip into conversation if your daughter needs or wants specific items like a new bed or new shoes (and what size) or a membership to the local zoo or dance lessons. If she’s computer savvy, create an Amazon wishlist and let her know about it to help her brainstorm gift ideas.
Don’t pressure your mom into buying things your daughter needs or wants. Don’t give her a guilt trip or hint in any way that you have been disappointed with gifts she has given in the past. Just let her know what your daughter could use, and then let it go. Whatever your mother decides to give is up to her, and her act of gift giving should be sincerely appreciated — irrespective of if you keep the gift or not. ~Unclutterer

You can take a picture of the child using the item, send it off to the giver, thank them again and then donate the gift.
You can keep them for “rainy days” or rotate toys regularly, if you would like. But don’t feel obligated to. For many parents, having to manage and organize all the toys takes away from the most important thing that they should be doing: spending time with their children.
Just because people give gifts, doesn’t mean you are obligated to keep them. A gift should not have strings attached (if it does, there is probably more than just the issue of gifts that needs to be addressed).
Of course we want to express appreciation when someone gives something, but it doesn’t mean those items have to stay in our home.  Giving the gifts away doesn’t mean you are disrespecting or ungrateful. You are the one that has to live in your home, you are the only one that needs to be happy with it. People that do not live in the home, have no say. 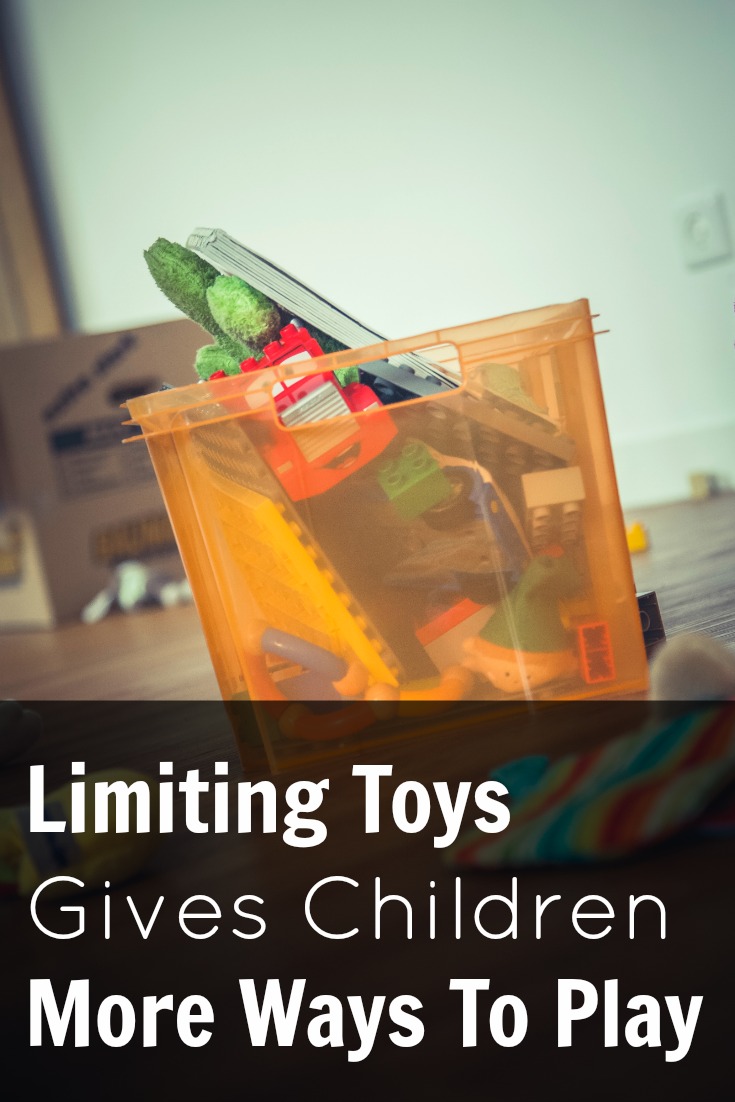 Join over 41,517 subscribers and participate in the Yearly Decluttering Challenge: Declutter 2022 Items in 2022!

Success! Now check your email to confirm your subscription.