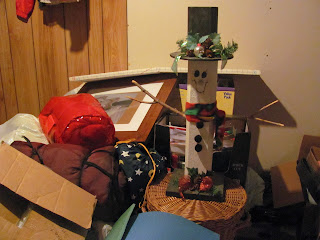 The last couple weeks I’ve been talking about sentimental feelings and being responsible for your own home’s atmosphere. (not taking other people’s sentimental feelings!)
What about giving sentimental items to someone else so you don’t have to deal with the emotions of letting it go?
Of all my clutter, the hardest time I had was getting rid of my sewing and craft supplies.
I had piles of fabric.
When I looked at them, I could imagine the possibilities.
But it was also a burden to me.
I also saw how I wasting money when I bought it and didn’t do anything with it.
I saw wasted space as it took up room in the house.
I saw guilt.

My guilt.
Now, the easiest way to let go of something is when someone else wants it and loves it as much as we do.
But… do we really want to burden them with it? Isn’t that asking a bit much?
I’m sure I could have found another creative person who would have drooled if they saw my piles of fabric.
And they would probably love it as much as I did…
And they would probably have the same guilty feelings too!
Can’t you hear it?
“Rachel gave this fabric to me, wasn’t that nice? I should be doing something with it. I wish it wasn’t taking so much space. But how can I give it away? She loved it so much, she wanted it to go to a good home…”
I remember a story about a lady who lived her life helping people. When she died all her belongings could fit in the trunk of her car.
She had been a blessing to her children and grandchildren as a person, not by giving them things.
So next time your tempted to save yourself from that hard pull of just donating an item or throwing it away (yes, if we’re honest, some things just need to be thrown away!), remember:
You don’t want anyone else’s guilt.
Don’t give your guilt to anyone else either!

Let it go and free yourself and the people you love!
For more decluttering inspiration, click here.