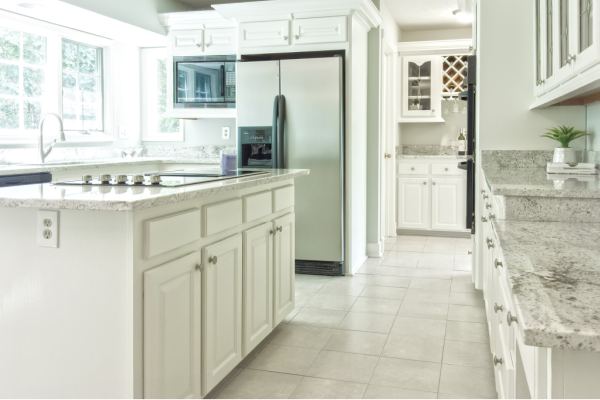 Have you ogled the pictures of model homes, and longed for similar kitchen counters- where there is nothing on them except a bowl of delicious fruit?
Me too!!
And I never thought it would be possible, but I’ve learned and I’d love to share with you how to maintain completely decluttered counters.

First, we have to make room in the cupboards

Most of us have cupboards that are full of all kinds of cool gadgets! But they happen to gadgets that we just don’t use, so we’ve pushed them into the cupboard “in case we need them someday” and the items that we do actually use sit on the counter.
After I had decluttered a few rounds and realized I wanted to embrace a more minimalist home, I had to be honest with myself on how useful these “useful” things were to me.
Sure, they might be useful- but I wasn’t using them, so they weren’t actually useful to me- instead, they were hogging the space that I needed for my truly useful things.
That meant getting rid of things like:

Your list may look completely different than mine, but if you completely empty your kitchen cupboards and only put back the things that you use weekly, you’ll find a lot of space had been taken up with tools that aren’t being used.

Then, give everything a home of its own

Now that you’ve cleared out the cupboards, you can put things away that are sitting on the counters.
The oils, the vinegars, seasonings, toaster, cutting boards, all these things can be put up and away.
It might seem weird at first to put away the things that we use regularly. But it doesn’t take much time or effort to get them out and put them away again.
It’s helpful to store items close to where you use them: the spices by the stove, the mixing bowls near where you bake, the cutting board and knives by the counter you do all your prep work on.
When you look at your kitchen, think of each area as a zone:

Then you can group all the tools that go with each zone.

The drink zone would include:

The baking zone would include:

Put things away as you use them

I know it seems obvious, but for many years I did not put things away.
I would get out the coffee beans and leave them sitting on the counter.
I would drink my coffee and leave my cup on the end table.
I would use the scissors to open a package and leave it sitting there to put away later.
I would use spices while I cooked and leave them sitting beside the stove.
For some reason, in my mind, I was saving myself time by leaving them right where I had been using them. But the truth is, it takes more time later because then we actually have to set aside time to pick up after ourselves.
If we put things away as we go, we never have to play catch-up and clean-up. The counters will be free of stuff and we can easily use them when we need to.

Have a reset time

I resisted all forms of chores for years. No one wants to spend their days “doing chores,” right??
But when you have a reset time in place, just like you brush your teeth at night without considering how much time it’s going to take- the kitchen gets tidied with very little thought.
The thought of doing the work is more exhausting than the actual work- so when you have a routine built into your day and week that have you tidying up, you do it without thinking about it.
And suddenly, you look around your home and realize that there is nothing left to do- you already DID it!
My resets are:
Morning after breakfast

You can check out my Home Reset checklists here.

Know that imperfection is ok

Doing these four things can free up so much counter space – getting rid of the excess, creating homes for things, put things away as you go, and establishing daily home maintenance routines means that your counters can stay clutter-free (or close to it).
Because we have a big family, I tend to focus on having one clear counter. It’s my biggest counter, the one I use for most of my prep work and baking. When I go through the kitchen throughout the day, I tidy this counter up.
Across the kitchen is our “drink zone” and I don’t stress about drinking glasses being left on the counter. We wash them in the evening- and everyone has a different glass, so it’s easy for the kids to grab their glass and fill it when they’re thirsty.
I love having my one clear counter. And I also know that if I tried to keep every single surface in my home clean 100% of the time- I would be constantly working at it.
So I live my life with my one beautifully clean counter and tidy up the other counters every night before bed. Then at least I start the next day with those beautiful clear counters. And that’s enough. ❤️ 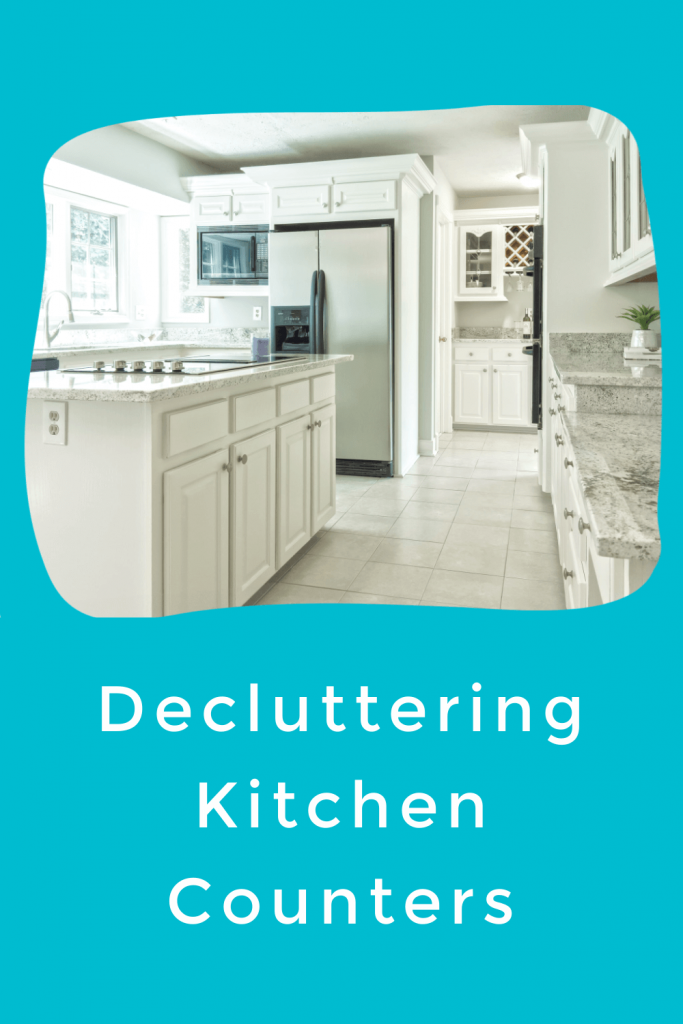 ← How to complain less and appreciate more2021 in 2021 Decluttering Challenge →