In this blog, I tend to focus a lot on decluttering. I know when I started seeking minimalism, I needed guidance with even the most basic beginnings of decluttering, I longed for encouragement and someone who had been through it, sharing what they know. So, for many articles, that is the bent I take.

But I have come to realize that decluttering can be addictive in and of itself, and though decluttering is spoken of frequently here on the blog, it’s not the end goal to have everyone just decluttering.

The addictive decluttering I’m talking about here is very different than Compulsive Decluttering, which is a form of OCD, (where clutter causes extreme anxiety, to the point that life is challenging, because we do require a certain amount of possessions to live, but often the person with the disorder seeks an empty, clear and sterile environment).

I want to talk a bit about the habitual type of decluttering. Where the act of decluttering is what is enjoyed- it gives a sense of accomplishment, exhilaration from seeing the room transformed and dropping boxes off at a donation site gives a rush.

When decluttering becomes the focus, rather than just a venue for a lifestyle change, it needs to be addressed.

The only way to know if this is an issue for you is to spend some time in introspection and ask yourself some questions:

It is not exactly easy to live [minimally]. People and companies are really good at persuading you to buy things. As a society, we enjoy shopping because we get something new and exciting out of it. Once that excitement dies down, we get bored, so we repeat the process because we want that excitement again. Most people have a hard time understanding why anyone would want to be a minimalist because shopping is part of our culture, but funnily enough, minimalism allows you to explore new ways of finding that same excitement without having to whip out your wallet. ~The Blissful Mind

Most of us know that the clutter on the surfaces of our home contributes to the overwhelming and out-of-control feelings that we have. But to make the shift from just decluttering to embracing minimalism is an important step if you want lasting results.

You don’t have to have a sparse home in order to consider yourself a minimalist. Rather, minimalism is a belief, a lifestyle, with appropriate priorities and intentional actions.

Asceticism is a lifestyle characterized by extreme self-denial or abstinence from worldly pleasures. It is important not to confuse that with minimalism. ~Minimalism & Co.

Being a minimalist isn’t a ticket into an elite group or defined by a number of possessions.  Being a minimalist is something that starts in the mind and is driven by intangibles. The visible and tangible is only a byproduct of intentional living decisions. ~Loving Simple Living

If you find yourself desiring something more, to find meaning in life outside of material possessions, a minimalist path is definitely the way to go. Let go of the things that don’t add value to your life and do what you need to do to avoid them coming back.

Decluttering, in and of itself isn’t the goal. It’s a means to an end.

A small disclaimer: I continue to declutter. Certainly not to the same extent I used to, and as more and more of my children leave the nest, I imagine my weekly decluttering will decrease as well. Having a family of 7 means that more things come into the home, so if I want to maintain the atmosphere I have worked so hard to achieve, I have to build decluttering into my weekly routines and the way I live day-to-day.

For several years I had to focus on getting rid of large amounts of items I had collected over the years. Toys, clothes, sentimental items, papers… I had to set aside time to sort, decide and discard.

Don’t get me wrong, it’s good if you get a feel accomplished and excited because of the progress you made when decluttering. But there is more to life than just feeling accomplished every day.

There is more to life than just making it through and marking off a to-do list. Oh, that is definitely rewarding, I love my lists, my charts and feeling accomplished at the end of the day.

Don’t know what your life purpose is? That’s ok – the more superfluous things you let go, the more introspection has to be done, the more you evaluate your beliefs and look for meaning.

Just like decluttering shouldn’t be the goal, minimalism isn’t either. Rather, minimalism frees me up to devote my life to what is most important to me.

At its core, minimalism is the intentional promotion of the things we most value and the removal of everything that distracts us from it. ~Becoming Minimalist 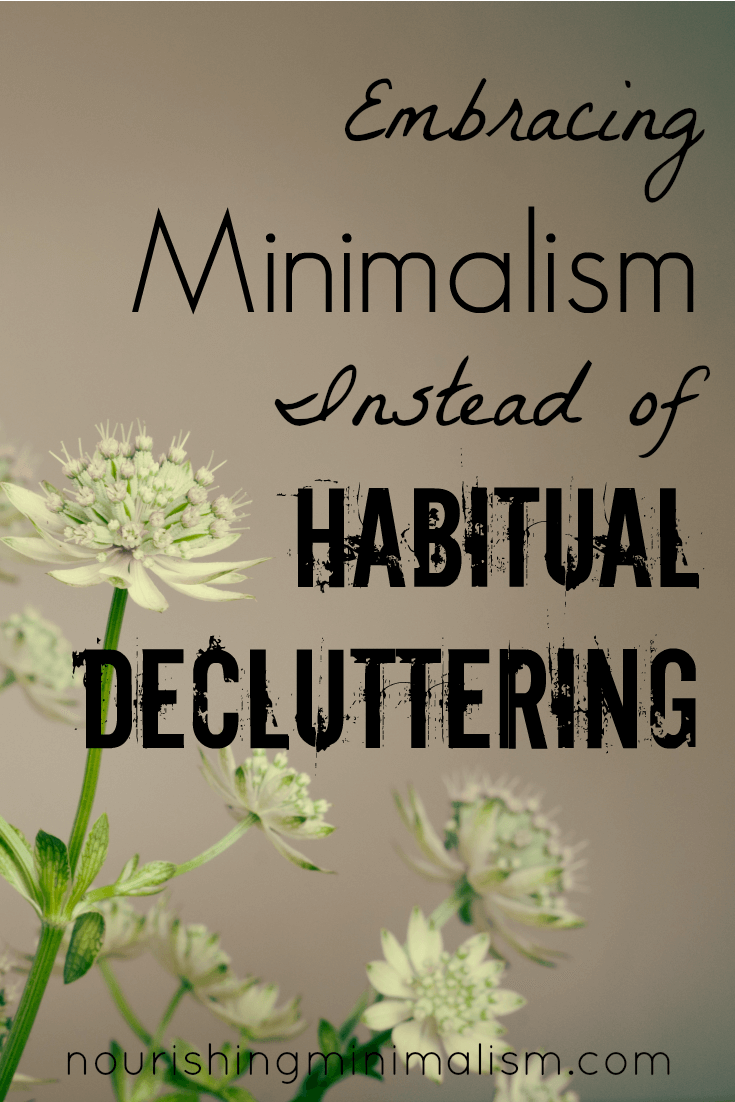