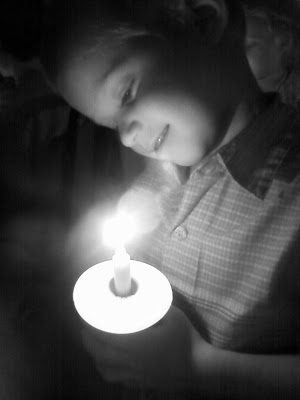 On Christmas Eve we attend a candle light service.
Growing up we always had Christmas at Grandma’s on Christmas Eve, but at one point as adults we got so involved at church, that we had to be there for the service on Christmas Eve. Now that we aren’t as involved, I wouldn’t mind starting a new tradition, but, the kids have grown up with it, so to them, it wouldn’t be Christmas Eve without a candlelight service.
And the little ones love holding the candle!
After they held candles and sang, the chrildren sit together at the front of the building for a prayer of blessing.
Then we have a time to stand around with friends and enjoy Christmas goodies.
To contain the sugar high the children are experiancing, we buckle everyone in the van and drive around town to admire Christmas lights. There are a several houses that have their lights set to music and one adorable neighborhood that decorates as “Whoville” and has the story of “The Grinch” depicted on signs as you drive down the street. They’ve done a lovely job with it. 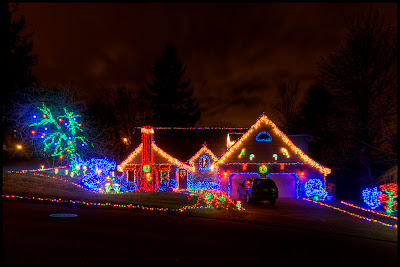 We also have “Candy Cane Lane”, “Weath Lane”, “Tree Lane” and “Misfit Lane” where, as we drive through, the kids all shout out the names of charactors from “Rudolf the Red-nosed Reindeer“, such as the squirt gun that shoots jelly, a cowboy riding an ostrich and a train with square wheels.
Even though the teenagers grump getting in the car to go look at “the same thing as last year” they join in with the carols on the radio, point out charactors to their younger siblings and laugh at the grinch that popped out of the window.
What are your Christmas Eve Traditions? Leave a comment and let me know!