Mel Robbins came up with the 5-Second Rule to help herself get out of a very dark place in her life.

I read her book, I’ve watched her videos and I think it’s a wonderful tool to use!

Especially when we are overwhelmed with our home and we need to tackle certain projects like decluttering, or organizing, or learning just basic home maintenance routines.

The idea behind the 5-Second Rule is to count down… start at five, count down just like you’re launching off into space, five, four, three, two, one, take off!

Mel talks about this as preparing your brain to take action.

Your brain knows that at the end of that countdown something needs to happen.

If we try to talk ourselves into something and we think, “Okay, on the count of three, one, two, three, go.”

We could keep counting. We could continue with the thought process.

But when you count down five, four, three, two, one! We know psychologically that some sort of action needs to take place at the end of that countdown, which is why it’s so powerful.

So, if you’re using the 5-second rule to gain control of your home-

First, decide on what area you need to tackle.

This might be just normal cleaning chores of doing the dishes or clearing off the counter. Or it may be the project that you have avoided tackling like sorting and filing paperwork, (which was my big one).

Or perhaps the whole aspect of decluttering is overwhelming and you’re not motivated to do it.

So you need something just to help you take action.

After you’ve determined what you have to do, determine how much time you’re going to do it.

If you have an average amount of dishes, then you can say, “I’m going to do the dishes and complete those dishes.”

But if you have a project that’s rather large, like decluttering your kitchen and you’re just starting don’t say, “I’m going to declutter the kitchen,” that’s too broad.

Make your goal smaller so it’s something that you can focus on right here, right now, and you can accomplish it today.

Like sorting the cookbooks or going through the Tupperware.

Whatever that is, it needs to be something that you can accomplish today.

Then do that countdown!

Do it without thinking.

No more talking yourself out of it. Don’t let your brain process any of it. Just take action.

I like to set a timer because when I think of projects that I don’t want to do (you know, that stinking paperwork).

I would set my timer, count down, go do it.

And at 10 minutes, be done. It’s okay! You accomplished what was needed today. You can do more tomorrow.

10 minutes at a time will get the job done.

So don’t let your brain make it too big for you!

That five-second rule helps break that cycle of procrastination and helps you take the action that you need to take. 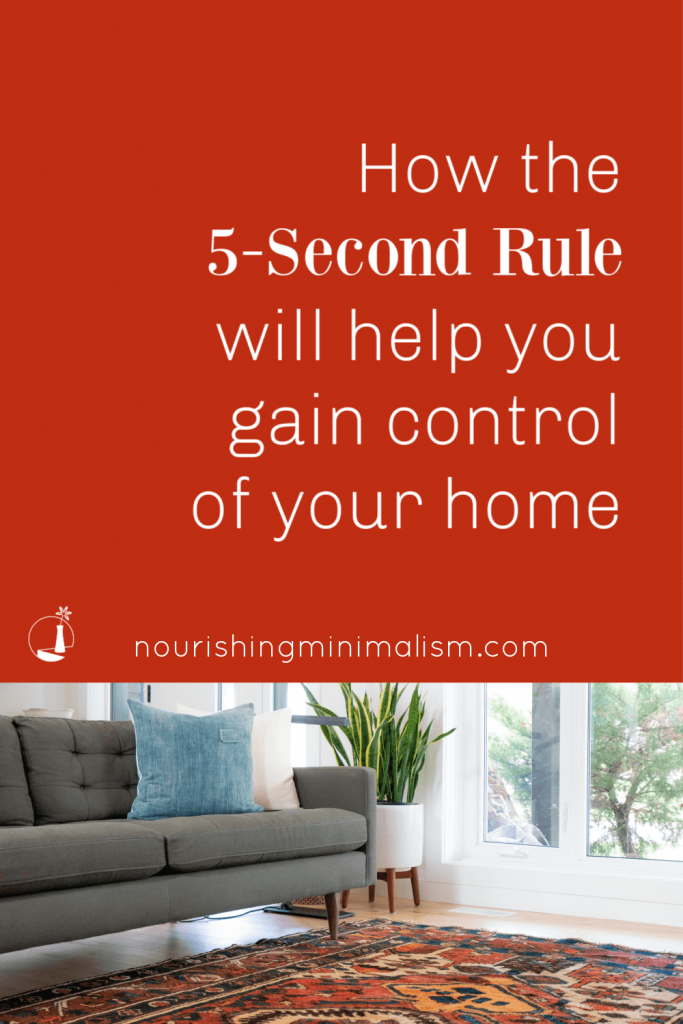