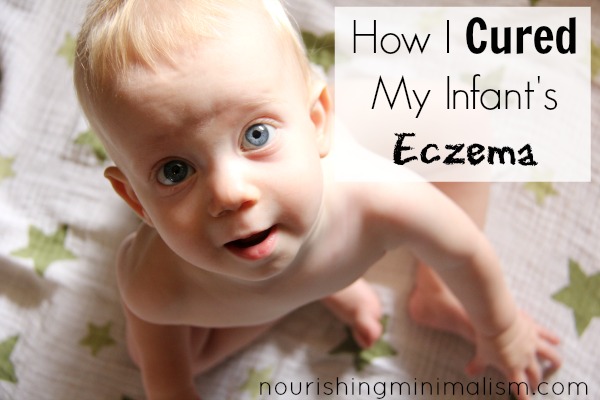 I had an interesting reader question this week, and I thought it best to answer in a post, in case others have the same question:

Hi Rachel, I love your blog, your commitment to Jesus, and your desire to inspire others with the freedom that comes from minimalism! I read your recent recipe post for dairy-free caramel apples (link here) and was struck when you mentioned your youngest’s eczema. My 5 month old daughter is suffering through her first outbreak of eczema which started last week (I exclusively breastfeed her). There is a history of eczema on my husband’s side of the family, but I know that diet can also play a role in causing flare ups. Would you be willing to share how you pinpointed dairy and gluten as the triggers for your son? Did you follow a particular approach to an elimination diet? Anything you’d be willing to share either via a blog post or private response would be most appreciated! Thanks in advance, and keep up the wonderful writing! ~Sarah

First, a little background:
One of my older sons had eczema as an infant and it went away when we went off dairy. I had heard that eczema was a common sign of a dairy allergy, and for him, that’s all it took. At that time, he was on formula and so it was a simple change.
When our youngest started showing signs, I went into denial. Though, at this point in my life, I knew I could eliminate dairy, it’s not something I really wanted to do. Since he’s exclusively breastfed, it was all about my own diet.
At some point he had red cracked skin over most of his body and in every fold of skin (neck, armpit, inside the elbows, behind the knees and all over under the diaper) and his chubby little fingers would scratch and scratch when I would change his clothes. There is just something heart breaking about a baby scratching. So, I had to do something.
I decided to get rid of dairy first, since my older son had had the same issue. It was going on 3 weeks, there had little to no improvement. Still, everything I read said to give it a full month.
I was talking with a friend, who is on the GAPS diet and she mentioned that the casein (milk) protein and gluten (wheat) protein are so similar in chemical composition, that in order to test for allergy, you have to eliminate both.
I had been off gluten before. Several years ago, I was on GAPS myself and found that gluten had been causing my migraine headaches. Over the years though, I had also found that I could eat gluten, if the grains were properly prepared: sourdough.
So, for 2 years I had been thoroughly enjoying eating sandwiches and toast again. To give that up, as well as cheese and butter?
Sigh.
So I did. I gave up gluten and dairy.
It worked. Within 2 weeks you couldn’t see the patches of eczema anymore. Now, 5 months later, there is nothing. His skin is perfectly clear and beautiful.
After his skin was clear for a month, I tried adding ghee back. Ghee is just the butter fat without the cream and is tolerated by many with dairy sensitivities, but sadly, his eczema started coming back.
So, what do we eat right now?
I have been able to buy goat butter and goat cheese and have been using that, which is tolerated just fine. We do eat rice and a few gluten free mixes that I like (King Arthur GF Pancake Mix), but other than that, we eat a lot of grain free meals. Most Paleo recipes are grain free and dairy free, so when I need a recipe, I will search Paleo first.
We don’t eat out. There is very little available without gluten and diary and it’s frustrating to try. When I do find something I can eat, I find that whatever I cook at home just tastes better than the GF/DF options out there. 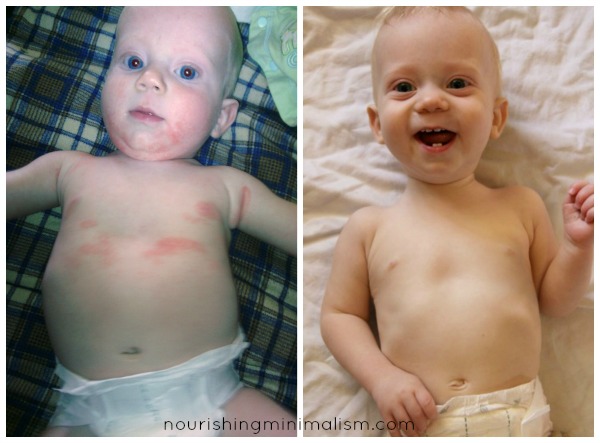 When he gets to be a year old, I plan on doing the GAPS Intro diet with him, in order to heal leaky gut, which I believe is the root cause in both of us. Currently, he’s not interested in solid foods, so I will just start with GAPS foods, which are nutrient dense and easily digestible, and hopefully before he is 2, his leaky gut/food sensitivities will be healed.
If you (or your child) have been struggling with eczema, I know there is a cure. It takes work and determination, but so many have found relief and healing through diet.
Here are some great resources:
The Eczema Cure
The GAPS Diet Starter Kit (Browse this site to find tons of info on healing the body)