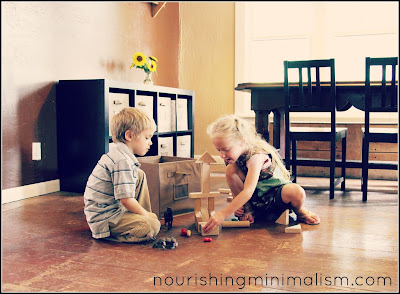 The kids weren’t playing with their toys. Most of their time has been spent outside or using their imaginations with boxes and non-toy items (paper, sticks, rocks, shovels, etc). But toys still cluttered their room and the living room, so we would have to pick up every day.
Even after limiting the toys, they still ended up everywhere.
So I decided to try something new.
Since they’re 6 and 4, it wasn’t a difficult discussion. It went like this:
Mom: “Hey kids, I was wondering if you would like to do an experiment.”
Kids: “Sure. What is it?”
Mom: “Pack up all your toys and put them in the basement for 2 months.”
Kids: “Ok.”
We all went and packed up the miscellaneous stuff stuck in the corners of their rooms.
We put away: stuffed animals, bouncy balls, baby toys, toy cars, dishes, tea set, dolls, jump rope, dress ups, bulldozer, Legos.

What we left out:

We put everything in a couple boxes. In Naomi’s room was left an empty antique fruit box (which has been her toy box). She asked if she could play with it.
So for about 10 minutes, it was a car. She padded it with blankets and sat in it. After that it was sat upright, covered with a blanket and it became a lemonade stand. She played with that little wooden box the rest of the day.

After 2 months, the kids have forgotten about their toys. They haven’t asked for anything from the box.  (except for dress up dresses) They play very nicely and can sit with their little box of blocks and animals for hours. They play outside without toys and use their imagination all day.
And there aren’t toys all over the floor in their room. The only chore they have in their room is to make their bed and put away clothes.

It’s been a wonderful experience!

I have no doubt that if they caught sight of the boxes or the things inside them, they would want them again. I’m not planning on getting rid of them at this point, I will keep them in the basement and after a year, I will pitch them. Normally I do not get rid of other peoples items without their consent, so I’ll just play this one by ear.
I know we are all happier without the toy chaos!
What do you think? Could you get rid of the toys?
Similar Topics: